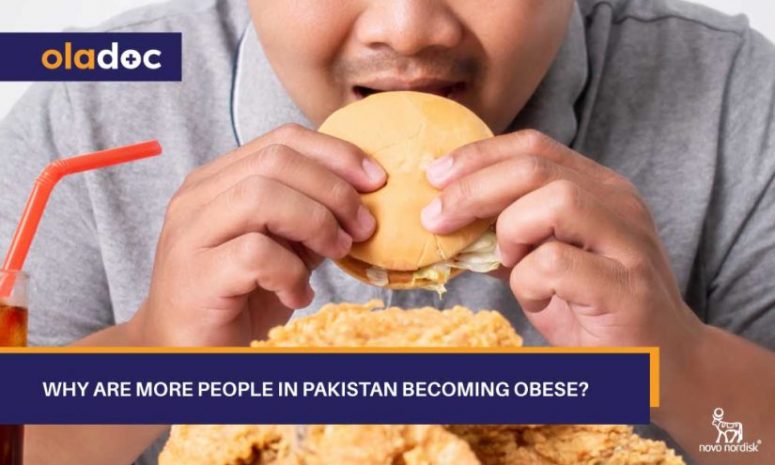 Obesity refers to the state of having abnormal or excessive fat that presents a health risk. Doctors, fitness experts and nutritionists agree that a body mass index (BMI) of 30 or more officially puts a person in the category of having obesity. Obesity is dangerous as it can lead to and has an impact on many other health conditions including heart diseases, type 2 diabetes, sleep apnea, infertility, PCOS and even mental health challenges.

A big part of the world’s population is living with obesity and the numbers are on the rise each year. According to a report by WHO, more than 650 million people were obese worldwide in the year 2016. Out of these 41 million were children under the age of five. Childhood obesity indicates a growing trend of overweight and obesity in the upcoming generations.

Pakistan, a developing country is also facing the double burden of malnutrition. Although undernourishment is widely recognized as a serious concern, obesity is often disregarded as a personal shortcoming rather than the other side of our malnourishment challenge. According to a study published in the Lancet Journal, Pakistan ranks 9th in terms of the number of people living with obesity. A local survey has shown that up to 50% population of Pakistan is facing obesity as per South-Asian standards, and this may go on to explain our 3rd highest diabetes prevalence in the world, obesity being the main cause of diabetes in the country.

This rising trend of obesity in Pakistan is alarming and requires proper attention. It may be due to a combination of factors. Here are four possible reasons why Pakistani population is becoming obese.

Junk food refers to food that is very low in nutritional value. This food usually comes in a packet, is pre-prepped and includes items that are deep fried or have high sugar content. Junk food has been directly linked with obesity by many researchers.

It is unhealthy and highly addictive because of high sugar content. Sugar is a carbohydrate which breaks down easily and gives a rush of energy. The body can get addicted to this rush and start craving it every few hours.

Food holds entertainment value in Pakistan, and as affordability increases with a growing middle-class and fast-food restaurant open left, right and center, our food preferences are increasingly moving towards these non-nutritious yet tasty, unhealthy choices.

Another factor that plays into the rising trend of obesity is a sedentary lifestyle. With growing urbanization, desk-based educational and work environments, vertical living, antisocial lifestyles, digital adoption, lack of green and open spaces in neighborhoods or organized sporting activities, our life is becoming increasingly sedentary in nature. These trends of a lazy lifestyle are pushing Pakistani population towards the obesity line.

One aspect of obesity in Pakistan is the use of simple carbs in the local diet. Pakistan is mainly an agrarian country which means that wheat, rice and pulses are the main elements of the diet. All these crops have simple carbs which create sugar craving and lead to over-eating. Our diets are also very rich in fat content. A carbohydrate-based diet combined with inactive lifestyles is making Pakistanis obese.

A big part of the population which is obese is young people. People in the millennial generation have problems that are very different from previous generations.

With social media on the rise, the new generation has to face problems like fear of missing out, anxiety, depression and body image issues. Exposure to content from around the world influences young brains into adapting trends that are damaging to their mental health.

Disorders such as binge-eating or the pressure of social gatherings are more common than ever. These mental health problems may lead youngsters to eat disproportionately making them obese.

If you are facing obesity or have a tendency to be overweight and need help to manage your condition, you should consult an obesity specialist as soon as possible.

You can also book an appointment with the best nutritionists in Karachi, Lahore and Islamabad at oladocx.com.