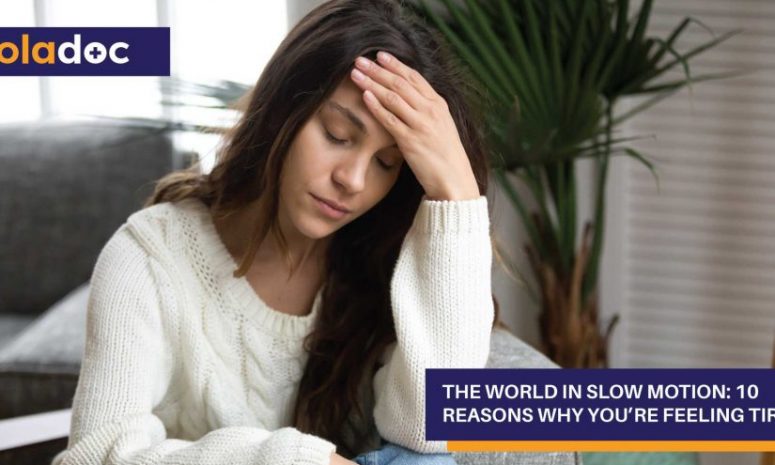 Do you find it difficult to stay awake, alert and productive throughout the day? While inadequate and low-quality sleep could be the answer, feeling tired on a regular basis could also indicate dietary and lifestyle issues or even, an underlying disease.

If you feel tired all the time, it might be time to consider reasons behind this. Terminal fatigue can be due to physical or psychological factors but it can also be contributed to one’s lifestyle. Thus, some changes might be necessary for your long-term quality of life.

According to your doctor, these might be causing your low energy levels:

Since iron transports oxygen within the body, an iron deficiency-mainly due to loss of blood-can result in inadequate oxygen supply to all the body cells, causing fatigue. While common in pregnant and postmenopausal women, those with heavy periods are particularly susceptible to iron deficiency anemia accompanied by dizziness, irritability and headaches.

However, regular consumption of leafy green vegetables, eggs, legumes and other iron-rich foods paired with foods high in Vitamin-C (to improve iron absorption) can reduce the risk of anemia.

A common culprit of fatigue, elevated blood glucose levels can impair the normal functions of body cells by interfering with blood circulation and the supply of necessary nutrients and oxygen, which results in chronic exhaustion. However, since glucose is used by the cells as ‘fuel’ for normal functioning, low blood sugar levels can also cause fatigue.

Regular fatigue is one of the first signs of the underproduction of thyroid hormones. Usually accompanied by constipation, weight gain, dry skin, lack of energy and aching muscles, hypothyroidism-induced exhaustion is most common in older people and women.

Also known as Myalgic Encephalomyelitis, or ME, this condition is diagnosed only when fatigue lasts persistently for over 6 months, with an increasing inability to concentrate. Other symptoms of ME include regular muscle and joint pain, a sore throat and weakness. However, the disease does not have a specific diagnostic technique, and is usually diagnosed after other possibilities are ruled out.

People suffering from this condition, particularly middle-aged, obese men, usually wake up multiple times while sleeping, which disturbs their sleep cycle. These people can sleep for hours and still end up feeling tired and fatigued.

Sleep apnea happens because the throat narrows while sleeping and obstructs the airways, resulting in snoring, reduced oxygen and high carbon dioxide levels, forcing the brain to wake up the body.

Along with diarrhea, anemia and unexplained weight loss, chronic fatigue is a common symptom of Celiac disease, which is a serious form of gluten intolerance-commonly found in bread and cereals.

Other food intolerances like dairy, soy, eggs, or corn-might also cause lethargy. These intolerances are however easily manageable and can be identified and controlled by practicing an elimination diet; i.e. the removal and avoidance of possible sensitivity-causing foods.

In this situation, blood is extracted from body tissues and re-supplied to the heart and other vital organs to maintain their function, as the heart is unable to provide an appropriate blood supply to the entire body, which results in exhaustion and breathlessness.

Psychological factors have a huge impact on your daily fatigue level. Among other factors like emotional shock, trauma, mental health disorders etc…the most common causes of terminal fatigue is caused by anxiety and depression.

Stress induced by our everyday lives often culminates in anxiety and depression, resulting in insomnia, waking up earlier than usual, low energy levels, and eventually, persistent fatigue. Practicing stress-relief exercises and eliminating or reducing anxiety and depression-inducing factors can help in combating lethargy.

While a quick source of energy, the increased blood sugar levels caused by excess consumption of refined carbohydrates such as sugary or instant foods stimulates increased insulin production in the pancreas, resulting in a rapid drop in energy levels. Try eating fibre-rich foods such as vegetables and legumes, instead, for stable energy levels.

As opposed to the common claims of feeling tired as an excuse to not exercise, studies have shown that, when comparing people with similar job descriptions, those who regularly exercise are less likely to experience fatigue as compared to those who don’t.

You can regain your stamina and energy by replacing sedentary practices with active ones, such as walking while talking on the phone instead of sitting, taking the stairs instead of a lift and opting for walking over driving short distances.

While lifestyle and diet-induced fatigue can be eliminated through simple adjustments, if you suspect any of the above conditions, contact a doctor immediately or book an appointment with a best General Physician in Multan, Karachi and Islamabad through oladocx.com.