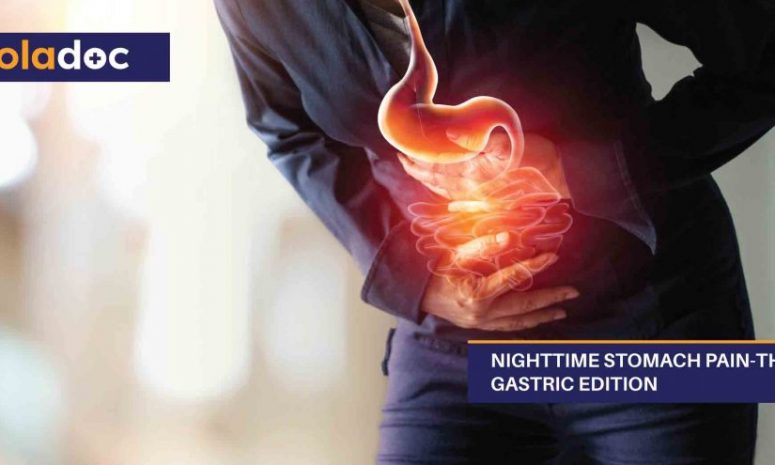 Identified by a burning sensation, acid reflux occurs when stomach acids travel up the food pipe. Acid reflux often occurs after eating 2-3 hours before bed, which forces most of the digestion to occur while lying down. This results in an acid back-track and stomach pain.

Other co-occurring symptoms include nausea, vomiting, gas, sore throat, cough, and bloating. If left untreated, chronic acid reflux can cause inflammation, scarring, bleeding, and ulcers in the esophagus (food pipe).

Nighttime stomach pain is a frequent occurrence with IBS (inflammation in the long intestine), along with gas and bloating after meals; which further amplify the pain. However, large evening meals may also worsen abdominal pain in people with IBS.

Along with acid reflux, other conditions like Gastroesophageal Reflux Disease (GERD) also cause heartburn, along with pain and inflammation in the esophagus, which worsens when lying down.  On the other hand, Gastritis irritates and inflames the stomach walls, resulting in a burning sensation in the stomach, along with gas, nausea, and vomiting.

Like IBS, Crohn’s disease is also a type of Inflammatory Bowel Disease, i.e. it causes inflammation in the digestive tract lining, including the stomach and intestines. This inflammation worsens with overeating, eating spicy foods, or eating before bed; often manifesting as abdominal pain.

Other symptoms of Crohn’s include unexplained weight loss and extreme fatigue. It is most common in people between 15-35. If the situation becomes too intense, consider consulting a gastroenterologist in Karachi for treatment.

Excess or prolonged NSAID use, or an H. pylori bacterial infection weakens the healthy gut bacteria, resulting in stomach acid buildup that damages the stomach or intestinal walls to cause ulcers.

As a result, you may experience burning abdominal pain; both a full and empty stomach. This pain intensifies between meals and at night, when there is the least amount of food in the stomach.

Gallstones form when excess bile secreted from the liver during digestion builds up to form hardened lumps of varying sizes. In some cases, these gallstones may block the gallbladder, liver, or pancreas after a large or extremely fat-rich dinner, and interfere with digestion. This, then results in severe nighttime stomach pain.

Other symptoms of a gallstone include nausea or vomiting, fever, unexplained fatigue, jaundice (yellowing of the skin and eyes), and light-colored stool.

Appendicitis (inflammation and infection of the appendix) may be to blame if your stomach pain is severe and occurs suddenly without any clear reason, unlike most of the above conditions. The pain generally travels down towards the lower right abdomen from the belly button, and worsens with slight activity or movement.

Appendicitis can become a medical emergency if the appendix bursts and infection spreads within the abdominal cavity.

Infrequent nighttime stomach pain is usually due to common causes like gas, which are easily treatable. However, consult with your doctor if pain becomes regular or at least once weekly alongside any of the above symptoms, and interferes with daily activities.

You can also book an appointment with a top Gastroenterologist in Faisalabad, Karachi and Islamabad through oladoc.com,