Home Health Blog Everything you need to know about Zestril In Pakistan? 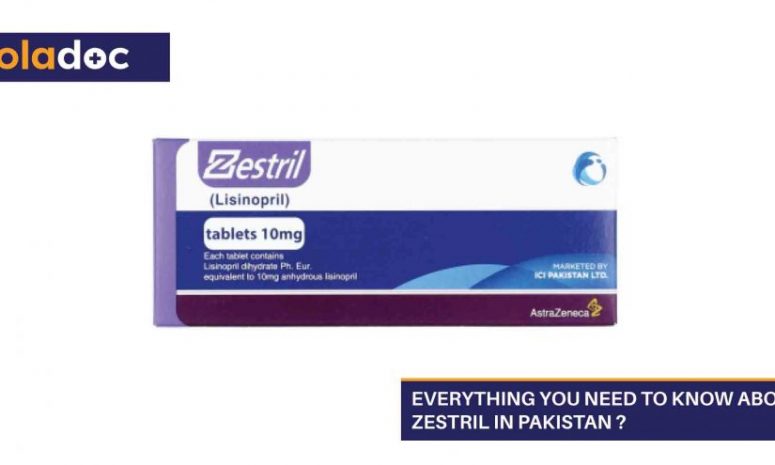 Zestril is a type of Lisinopril, which are drugs that belong to the class of ACE inhibitors. Essentially, they work by causing the blood vessels to dilate, so that blood flows through them with ease. It is mostly used for treating hypertension, especially the cases where the blood pressure needs to be controlled urgently.

Zestril also works by promoting the excretion of sodium salts from the body. As sodium causes water retention in the body, it increases blood volume, exacerbating hypertension. Thus, Zestril’s approach to moderating blood pressure is two-pronged.

Zestril is a Lisinopril. These belong to a category of ACE inhibitors.

What are the available forms of Zestril in Pakistan?

Zestril is only available in the form of tablets in Pakistan

Zestril tablets are available in different dosage strengths. These include:

The suggested dosage initially for hypertension in adults is 10mg, once a day. For maintaining the condition, it is recommended that patients take Zestril 20 mg, once daily. The maximum daily dosage is 80mg per day.

How to take Zestril?

Zestril tables should not be crushed or chewed but swallowed whole with a glass of water. It is pertinent that doctor’s instructions be followed for the dosage, timing and frequency of the medication. Altering the medicine dosage on your own can have grave implications for your health.

Moreover, many people stop taking Zestril when their blood pressure normalizes. This is counter intuitive and can negatively affect their health. Thus, even if you feel that your blood pressure is fine, do not stop taking the medicine unless advised by your doctor. Otherwise, stick to the regimen regulated by your healthcare provider.

What are the uses of Zestril?

Zestril is taken to treat the following conditions:

What are the side effects of Zestril?

Using an ACE inhibitor can have some side-effects. These include:

What are the risks and warnings for Zestril?

People who have sensitivity to ACE inhibitors, should not use Zestril, or any other medicines with the same chemical composition. Consumption can lead to anaphylactic shock, which is a life-threatening condition. Therefore, be sure to disclose all and any of your allergies to your doctor at the time of the visit, so that they do not prescribe medicines that can lead to hypersensitivity.

Use of Zestril during pregnancy should be done only at the discretion of the doctor, and that too, only after a thorough risk assessment has been done. When taken during pregnancy, especially during the second & third trimesters, it can be injurious to the health of the baby.

Women who are nursing should also only use Zestril, or any other Lisinopril when advised by their doctor. It can get absorbed into the milk, and can gravely affect the baby’s health.

People who are taking sacubitril should not take Lisinopril with it. Even after ceasing the use of sacubitril, they must wait for 36 hours before they can use Lisinopril.

Diabetics using insulin or taking oral hypoglycemics should take Zestril with caution. They should especially be careful during the first month of treatment. Furthermore, Diabetics who take medicines with Aliskiren as an ingredient should not take Zestril.

Individuals with health conditions like diarrhea, volume depletion, heatstroke or infections that lower blood pressure should use Zestril with caution. Similarly, those taking medicines with diuretics in them should also be careful when using Zestril. Such people are at risk of severely low blood pressure, which can be a life-threatening situation.

People with heart conditions like ischemic heart disease or cerebrovascular disease should be cautious with their use of Zestril. There is a danger of blood pressure falling below normal levels in this condition, which can be further exacerbated with Zestril and other ACE inhibitors since they too are aimed at lowering blood pressure.

Those people with conditions that obstruct the flow of blood from the left ventricle like aortic or mitral valve stenosis or hypertrophic cardiomyopathy should take Zestril with caution.

People suffering from renal impairment must be cautious when taking an ACE inhibitor. In such cases, doctors frequently test serum creatinine and potassium levels, so that they can watch out for the health of the patients. Similarly, people with diabetic nephropathy, and who are taking angiotensin II receptor blockers also should not take ACE inhibitors like Lisinopril.

Liver does the metabolism and excretion of drugs in the body. When it does not work properly due to any disease or disorder, drugs get accumulated in the body, leading to severe health issues.

Zestril can cause blood diseases like neutropenia, thrombocytopenia, and anemia. Thus, anyone with blood issues that alter blood count should take Zestril with caution. When on Zestril therapy, your healthcare provider will carefully monitor your blood count, especially when you also suffer from altered renal functions.

Moreover, similar caution should be observed by people taking drugs like procainamide, allopurinol, or a combination of these, or have diseases like collagen vascular disease, when taking Lisinopril.

ACE inhibitors can lead to the build-up of bradykinin in the pulmonary tree, which then causes cough. The resultant cough is non-productive and persistent, which gets better with the discontinuation of Zestril.

You should inform your healthcare provider if you get a cough with the use of Zestril so that they can give an alternative medicine.

People who get anesthesia may also be administered agents that lower blood pressure. Thus, in such cases, ACE inhibitors should only be given in cases where blood pressure needs to be controlled and there is no risk of hypotension. Otherwise, there is a risk of the blood pressure falling to severely low levels, causing a life-threatening state known as shock.

Hyperkalemia occurs when there is excess potassium in your blood. ACE inhibitors lead to hyperkalemia, as they work by stopping the release of aldosterone. Hyperkalemia tends to become a life-threatening condition.

Patients on lithium therapy should not take Zestril, if, for some reason, they have to take the two together, it should then be done with extreme caution.

Those taking gold injections like sodium aurothiomalate complain of nitritoid reaction when they take Zestril. Symptoms of this include facial flushing, nausea, vomiting, hypotension.

When Heparin and cyclosporine are taken with Zestril, there is a risk of developing hyperkalemia. Thus, it is pertinent that people in such a situation monitor their potassium levels alongside Zestril therapy.

Individuals with bleeding disorders, or those taking anticoagulants for blood thinning, should take Zestril after consulting with their healthcare provider.

Interactions between Zestril and other medications:

Lisinopril or any other ACE inhibitors may interact with other drugs. However, drug interaction does not mean that you stop taking your medicines on your own, instead, tell your healthcare provider about it.

Following are some drugs that can interact with Zestril:

To prevent drug interactions, you should provide your healthcare professional, a complete medical history, including any allergies and conditions ailing you as well as any medicine that you are currently taking. Doctors can then prescribe medicine and dosage accordingly.

What is the price of Zestril in Pakistan?

The prices of Zestril tablets in Pakistan are Rs.17/-.

How to get Zestril in Pakistan?

Zestril is not an over-the-counter medicine. Therefore, you need to present your latest prescription authorized by a doctor to your pharmacist in order to buy Zestril.

What medicines are available as alternatives to Zestril in Pakistan?

Lisinopril is also available under different brand names, including:

Zestril is a type of ACE inhibitor, which is used to dilate blood vessels. It helps with treatment of hypertension, kidney problems, heart failure etc. However, Zestril also has many contraindications and must only be used at the discretion of the doctor.

In order to consult a doctor before using Zestril, make sure to use Oladocx.com  and get the best expert counseling while availing up to a 50 percent discount on your appointments.