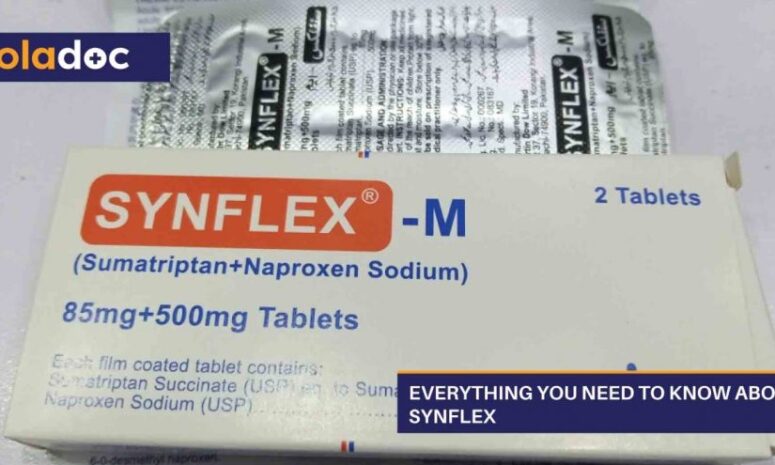 Synflex is a type of pain killer. It hails from the family of non-steroidal anti-inflammatory (NSAIDs) drugs. NSAIDs are used for the treatment of long-term pain, including headaches, joint aches especially in osteoarthritis, sprains etc.

Specifically, Synflex is Naproxen, a type of NSAID that is commonly used in musculoskeletal pains like back pain, gout, rheumatoid arthritis etc. It is however also used to treat period pains and abate symptoms of migraines in certain cases as well.

Synflex essentially works by stopping the production of the chemical mediators that lead to inflammation and pain in the body. It is used in the short term i.e., only few doses can be taken and are required, mostly, for pain relief.

The main chemical component of Synflex is naproxen sodium.

What are the Available Forms of Synflex in Pakistan?

Synflex is available in the market in the form of film-coated tablets.

What medicines are available as alternatives to Synflex in Pakistan?

Synflex is Naproxen sodium, a type of NSAID, which is also available under other brand names as well. These include:

Synflex is available in three different dosage strengths. These include:

Mostly, the dosage strength used is the 550mg tablet. However, you should follow the dosage prescribed by your healthcare provider, keeping in mind your pain levels and health.

Generally, for adults, the recommended dosage is 275 to 550 mg twice daily. It is imperative to not exceed the daily limit of 1650mg per day. It should not be taken for more than six months straight and it is suggested that you use it for the shortest possible time only.

How to take Synflex?

Tablets should be swallowed whole with a glass of water and should not be crushed or chewed. It is pertinent to take Synflex with food, as it is an NSAID, and a strong one at that. If taken on an empty stomach, it can lead to ulceration in the stomach, causing complications like acid peptic disease and gastritis.

Moreover, if your stomach hurts or you feel nauseous after taking the medicine, it is vital that you inform your doctor as it may be an indicator of underlying gastric issues.

Synflex should not be taken very often. It should also be used for the shortest time possible to protect the stomach as well.

What are the Uses of Synflex?

Synflex is used to treat the following conditions:

What are the side effects of Synflex?

Synflex is relatively commonly used by people to treat a number of ailments, however, much like most drugs, it can also have side effects on the body.

What are the risks and warnings for Synflex?

People can be allergic to naproxen sodium. A mild form of allergic reaction involves itching and redness of the skin, wheezing, etc. However, a severe allergic reaction, anaphylaxis, can also result in death if medical aid is not given in time.

Thus, allergies should not be taken lightly. Instead, refrain from using the drug, especially unsupervised by a doctor.

Synflex can inhibit the production of prostaglandins, a chemical compound that protects the heart. Therefore, people who have a history of heart disease or have had heart attacks in the past are advised to use Synflex with caution.

It is not advised for people with stroke to take Synflex, as it can increase propensity towards it.

As Synflex leads to water retention in the body, it should be consumed with caution by people suffering from high blood pressure. The presence of sodium in the medicine can also compound the condition.

Congestive heart failure is a condition in which the heart is not able to effectively pump blood around the body. Patients with this condition are recommended to take Synflex with caution, as it can cause water retention in the body, exacerbating the condition.

Edema is, in layperson terms, swelling that happens when fluid from the vessels leaks into the nearby tissue, leading to ‘swelling’. Water retention can make it worse. As Synflex leads to fluid retention in the body, it should be taken with caution.

Gastric ulcers are caused when there are sores in the stomach lining, due to which person experiences extreme pain. NSAIDs cause gastric ulcers because they suppress the production of prostaglandins in the body, which also protects the mucosal layer. As the amount of this chemical is reduced in the body, the lining gets vulnerable to acid attack, leading to formation of sores.

Therefore, people with gastric ulcers and acidity should take Synflex with caution. Talk to your doctor if you experience pain after its intake, as they may also recommend drugs that have gastroprotective function alongside it.

People using anticoagulants for thinning their blood or suffering from bleeding disorders should take Synflex at the discretion of their doctor only; Synflex inhibits the production of chemical responsible for making clotting factors.

Thus, when Synflex and anticoagulants, which too restrain the production of clotting factors are taken together, the compound effect is rather grave. It can result in bleeding, which gets harder to control.

Long-term use of Synflex can lead to kidney impairment, and so, those already suffering from Kidney disease should be careful about their Synflex intake.

Synflex can exacerbate asthma, and thus, asthmatic people should take Synflex with caution.

The liver performs the vital task of drug metabolism and excretion. When the liver is diseased on account of any condition, it may not be able to perform this task well. This can lead to the accumulation of toxins from drugs in the body and subsequent adverse effects manifest in the body. Therefore, people with liver disease should take Synflex with caution.

Pregnant women should not take Synflex without the approval of their doctor. Synflex can affect the functionality of the baby’s heart, especially when taken in the third trimester. Similarly, mothers who are breastfeeding should ask their healthcare provider before taking Synflex.

Interactions between Synflex and other medications:

Synflex can interact with drugs that you might be taking otherwise. However, this does not mean that you stop taking your medicines, or miss doses, but instead, talk to your doctor about it.

To avoid these interactions, it is highly recommended that patients be forthcoming and comprehensive with their patient history, so the doctor devises the prescription accordingly.

What is the price of Synflex in Pakistan?

How to get Synflex in Pakistan?

In order to purchase Synflex in Pakistan, you will need your doctor’s prescription that you will be taking along to the pharmacist.

Synflex is a relatively stronger pain killer, and is used to treat the muscular and joint pains. It is an NSAID, and thus, should always be taken with caution due to its impact on the liver, stomach and kidneys, amongst other things.

Synflex also has certain contraindications that the layperson is not aware of. Therefore, it is vital that you talk to an expert doctor about the various pains in the body and wait for them to prescribe a suitable painkiller rather than self-medicating.

In order to consult a doctor before using Synflex, make sure to use Oladocx or call (042) 38900939 and get the best expert counseling while availing up to a 50 percent discount on your appointments.