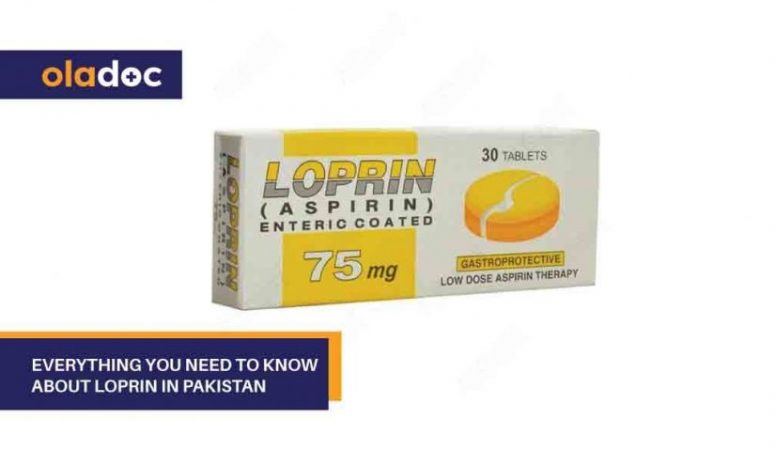 Loprin is an anti-inflammatory drug that acts by reducing the substances in your body that cause inflammation, pain, and fever. It also acts as an antiplatelet agent by inhibiting the clumping of platelets that cause blockage of the blood vessels. Therefore it is given prophylactically, and long-term as prevention of heart attacks and stroke as well.

Loprin is used to treat the following conditions.

You must take Loprin with food as it may upset your stomach or cause gastric ulcers when taken on an empty stomach. Tell your doctor if you feel stomach pain or nausea, as it may be a sign of gastritis. Try to take it for the shortest possible time. Do not crush or chew the tablet.

The side effects of Loprin may include;

The main chemical component of Loprin is aspirin, also known as acetylsalicylic acid.

What are the alternatives to Loprin?

The alternatives to Loprin are;

Loprin is aspirin that belongs to a group of painkillers and anti-inflammatory drugs. It works by stopping the release of chemical mediators that cause pain, thrombosis, and inflammation.

What are the risks and warnings for Loprin?

If you ever have had a skin reaction known as Steven Johnson syndrome upon Loprin intake, do not take it next time. Tell your healthcare provider your complete medical history.

Patients who have a condition called glucose 6 phosphate dehydrogenase deficiency, must take Loprin with extreme caution as it can cause hemolysis.

People suffering from long-term malnutrition must take Loprin with caution.

You should take Loprin during pregnancy only if your health care provider prescribes it. They may decide it based on the risk versus benefit ratio.

Mothers who are breastfeeding their child should take Loprin only on the advice of their healthcare provider as some of its concentration can be present in breast milk and affect your child’s health.

If a patient has lost a lot of fluid and is dehydrated, they should be given paracetamol IV with caution.

People suffering from gastric ulcers and acidity must take Loprin with extreme caution because it inhibits the chemicals that protect the lining of your gastrointestinal tract.

Also, it can cause ulceration in your stomach lining when taken for the long term. Your doctor may prescribe a gastroprotection along with Loprin.

If you are taking anticoagulants for thinning of your blood, or you have any bleeding disorder, take Loprin only on the advice of a healthcare provider. It inhibits the chemicals responsible for making clotting factors, and anticoagulants also do that. When taken together, they can result in bleeding due to increased anticoagulant action.

Patients suffering from kidney disease must take Loprin with caution because it can itself cause kidney impairment when taken for a long time.

Loprin can precipitate existing asthma. Therefore, take it with caution if you are asthmatic.

Interaction between Loprin and other medications

Loprin may interact with the following drugs. A drug interaction does not mean that you stop taking the medicine on your own. But you must tell your healthcare provider about it.

To avoid drug interactions, you must give a complete history to the healthcare provider about other health conditions you have and what medicines you have been taking. At times, a dose adjustment can help prevent drug interaction.

The price of Loprin tablet in Pakistan in the year 2022 is Rs.1.65 per tablet approximately.

Do you need a prescription to buy Loprin?

For buying Loprin, you do not require to have the prescription signed by your doctor. You can buy it from any pharmacy nearby.