Home Health Blog Does Nutella Cause Cancer? A Deeper Look 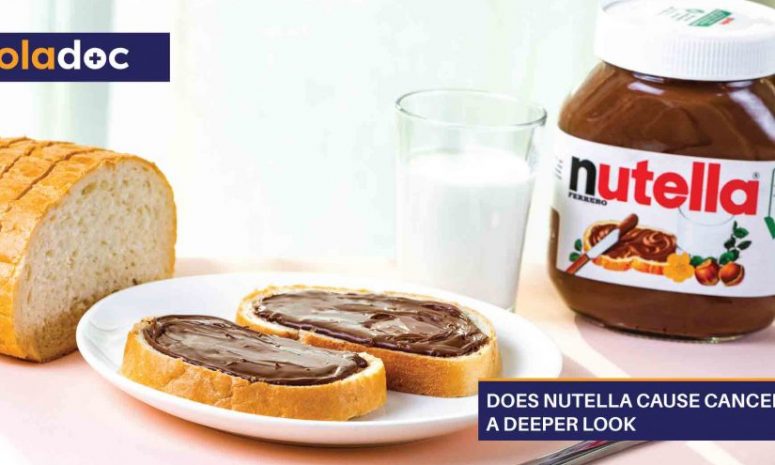 The last thing we need to hear about is the potential cancer-causing risk of Nutella. But how exactly does Nutella do that? Read on to find out what research says.

The European Food Safety Authority (EFSA) publishes an annual overview of food safety science that is conducted over the course of the year. A few years ago one of such publications looked at three well-known carcinogens in vegetable oils and processed foods: glycidyl fatty esters (GE), 3-monochloropropanediol (3-MCPD) and 2-monochloropropanediol (2-MCPD). So what does this have to do with Nutella? Well, one of the main ingredients of Nutella is palm oil, which has one of the highest content of GE and the other mentioned compounds.

In animal studies, GE is found to be a ‘genotoxin’ which can damage DNA and take a causative step in the formation of cancer cells. Moreover, 3-MCPD can damage the kidneys, and reportedly, the reproductive organs of the males in experimental animals.

The smooth texture of Nutella is due to the added palm oil. However, palm oil is quite pungent in real life; to remove this smell, Nutella undergoes an extensive process. This deodorizing process involves heating the oil to very high temperatures (more than 200 C), and it is during this process that contaminants form.

According to the report of the EFSA, palm oil and fat both contain high levels of glycidyl fatty esters (GE) and 3-MCPD. These levels are much higher than the amounts in the normal fat category. In comparison, low-fat margarine contains three times less GE and 3-MCPD than normal fat margarine.

How serious is the cancer risk in Nutella?

This report, which explains the side effects of the esters and MCPD fails to show the effects of these compounds on humans. Most of the experimental models are relevant to animal studies—mostly rats and mice, and none of these studies was infact done on humans. The metabolism of the rodents is vastly different from that of humans, and they are more prone to cancer and mutation.

Moreover, without human data, the levels of safety of GE and other contents cannot be determined. In real life, people cannot consume such high levels of these isolated chemicals. Nutella is composed of several ingredients and these chemicals are eaten in combination over time.

In addition, according to the World Health Organization (WHO) the dosage of 3-MCPD also matters in terms of cancer risk. Derived from the toxicology studies in animals, the WHO has set the lowest observed effect level (LOEL) of 3-MCPD at 1.1 mg/kg body weight/day before cancer is observed in organs like kidneys. Keeping this in mind, an average European adult is exposed to 0.4 microgram/kg body weight/day according to EFSA data.

What does nutella say?

Spokesperson from Ferrero, the company behind Nutella, state that the company puts the health of its consumers as its first priority. For this reason, the selection of raw materials as well as industrial processes is aimed at minimizing contaminant risks. According to company resources, the best option to ensure a quality product with the right consistency is palm oil. Moreover, palm oil does not interfere with the characteristic flavouring of the spread, and nor does it interfere with other ingredients.

Another reason to use palm oil, says the spokesperson, is to avoid the use of hydrogenated fat which would, in turn, produce harmful ‘trans fats’. Similarly, the environmental benefits of palm oil are higher as compared to other oils, in terms of land use. Palm oil claims five times less land than alternative oils.

Another company with high palm oil use: Nestle, has stated that it is taking the issue regarding MCPD seriously, and is funding scientific research to find how cancer causing compounds are formed and their impact on health.

Why can’t they use safer oils?

Substitute oils other than palm oils like sunflowers or rapeseed can be used to make nutella without compromising the taste, but the cost of production would go significantly higher. In fact, an estimate by Reuters tells that it would cost Ferrero upwards of $22 million/year more (Ferrero has not confirmed this figure).

Moreover, potentially huge added costs would be incurred if the recipe of Nutella is changed, along with updating manufacturing processes and equipment and sourcing of suppliers. As such, Ferrero spokesperson claims palm oil to be the ‘best option’ to ensure that the taste of the product does not change.

What does public health bodies say?

With regards to MCPD, the advice from officials is vague. According to the EFSA, dietary recommendations do not come under their domain. However, the UK Food Standards Agency is working with European partners to set a regulation pertaining to the findings of EFSA.

Get professional help to design a healthy menu for yourself and your family; book an appointment with top nutritionists in Multan, Karachi and Rawalpindi through oladocx.com,  for assistance to find the RIGHT professional for your concerns.

how does nutella cause cancer