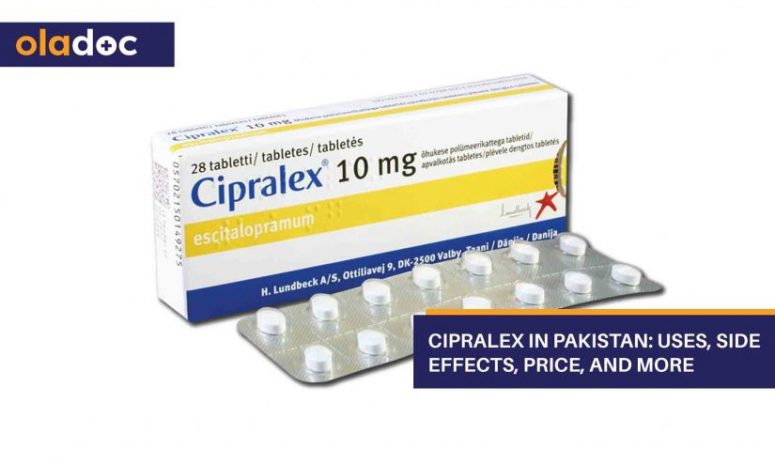 An antidepressant drug, Cipralex is used to treat the signs and symptoms of depression. It works by altering the levels of neurotransmitters in the brain.

Neurotransmitters are the chemical messengers in the brain. Fluctuation in their levels in the brain thus has implications for the mental, and by extension, physical health of the people.

As Cipralex hails from the class of SSRIs (selective serotonin reuptake inhibitor), it targets the neurotransmitter serotonin, exclusively. The underlying mechanism of Cipralex is inhibiting the reuptake of serotonin.

Depression is also a consequence of chemical imbalance in the brain. It results when serotonin levels in the brain fall. Cipralex increases the levels of serotonin in the brain, restoring them to normal, and thus helps people manage their symptoms of depression better.

To find out everything you need to know about Cipralex in Pakistan keep reading!

What are the Available Forms of Cipralex in Pakistan?

Cipralex is available in two different forms; tablets and solution.

Cipralex oral solution in only one strength, 5mL/mg.In the form of a tablet, Cipralex is available in three dosage strengths. These are:

How to take Cipralex?

Cipralex can be taken on an empty stomach, or with food. It needs to be swallowed whole, and thus no crushing or chewing should be done. It is important that you follow the dose and frequency as stipulated by the doctor.

Altering the dosage on your own can cause serious problems, as it then alters the levels of neurotransmitters, which in turn causes a dreadful chemical imbalance in the brain. Similarly, do not stop taking the medicine without talking to the doctor first.

Quitting antidepressants cold turkey can lead to a chemical imbalance in the brain, which can aggravate the symptoms of depression. To prevent the withdrawal, patients are then weaned off the drug, under the careful supervision of a doctor.

What are the Uses of Cipralex?

What are the side effects of Cipralex?

There are certain side effects associated with Cipralex, much like the case with most of the drugs. Potential side effects of Cipralex are as follows:

What are the risks and warnings for Cipralex?

A severe allergic reaction, known as anaphylactic shock, can result in people with a serious allergy to escitalopram.

Furthermore, anaphylaxis also causes swelling of the lips and tongue alongside wheezing, dizziness. Tingling in the hands, feet, mouth, scalps alongside plummeting blood pressure are also signs of anaphylactic shock. If people are not given a shot of EpiPen in time, they can die of anaphylaxis as well.

People already taking escitalopram, or a compound related to escitalopram, should not take Cipralex or any other form of escitalopram. This will compound the impact, thereby causing severe adverse effects on the body.

It is pertinent that Cipralex not be discontinued suddenly. People need to be gradually weaned off the drug as abruptly stopping it has serious consequences for their health.

People who are suffering from bipolar disorder or mania need to take Cipralex with caution, as it can precipitate their condition. It is also pertinent that they tell their healthcare provider about their medical history, so their prescription is drawn accordingly.

Anyone with a family history of suicide, or those who have attempted suicide, need to be given Cipralex with extreme caution. It is pertinent that they are monitored closely when they are taking drugs, lest there is an adverse effect on their mental health from the drugs, exacerbating their fragile mental state.

Individuals who are taking monoamine oxidase inhibitors like Tranylcypromine, Phenelzine, Selegiline, and Isocarboxazid, should not take Cipralex with it. The combinative effect of the two drugs can lead to a life-threatening condition known as serotonin syndrome.

In Serotonin syndrome, the neurotransmitter serotonin accumulates in the body, usually because the person is getting too much of the chemical from different drugs that they are taking. The symptoms of serotonin syndrome include agitation, restlessness, confusion, rapid heart rate, high blood pressure, and loss of muscle coordination.

Other signs of the condition include twitching in the muscles, dilation of the pupils, heavy sweating, rigidity in the muscles, goosebumps, shivers, headache and diarrhea.

Arrhythmias and other heart diseases

Cipralex, alongside diuretics, decreases sodium levels in the body. Therefore, when taken together, the effect is amplified. This can then lead to dehydration, low blood pressure, and arrhythmias. Thus, people taking Cipralex and diuretics together should exercise caution.

People diagnosed with closed-angle glaucoma need to take Cipralex with caution. It can cause pressure in the eyes to increase, resulting in a medical emergency.

Cipralex is off-limits during pregnancy. Similarly, mothers who are breastfeeding should not take Cirpralex.

The only scenario where is acceptable to take is when it is approved by the doctor, after a careful risk versus benefit analysis.

People with diabetes should exercise caution when using Cipralex.

Epilepsy or prone to seizures

If you have epilepsy or suffer from any ailment that results in seizures, you need to take Cipralex with caution; take only at the discretion of your doctor.

Along with St. John’s wort

People who need to take St. John’s wort for any condition need to be careful about using Cipralex

Along with Other medicines

One needs to practice caution when using other medicines like triptans, tramadol, oxitriptan, and tryptophan with Cipralex.

Those suffering from diseases that cause bleeding abnormalities or take medication that alters the clotting time of the blood need to be cautious with their use of Cipralex.

One should be very cautious when taking Cipralex with Pimozide, which is an antipsychotic drug.

Interactions between Cipralex and other medications

Cipralex can interact with other medicines that you might be taking. However, a drug interaction does not mean that you stop taking Cipralex, on your own, without consulting your healthcare provider.

Stopping the use of pertinent medicines can then have a serious impact on your health.

Some drugs that interact with Cipralex are:

To prevent drug interactions, it is vital that you give your complete and thorough medical history to your doctor. Include any diseases that you have, physical and mental, both. Also inform the doctor about conditions ailing you, allergies that they need to be mindful of, etc.

This way, your doctor considers all facets before drawing your prescription, and thereby prevents or avoids best possible, any dangerous drug interactions.

What is the price of Cipralex in Pakistan in 2022?

How to get Cipralex in Pakistan?

Since Cipralex is a prescription drug, it is not available over the counter. Therefore, you need to take your latest prescription, authorized by a certified professional, to your pharmacist.

What medicines are available as alternatives to Cipralex in Pakistan?

Brand names under which escitalopram is available include:

Mental health plays a crucial and pivotal role in our well-being. Not only does it impact our physical wellbeing but has a direct impact on the quality of our life.

The misconception that mental diseases can be controlled, or simply willed away by being happier is far from reality. Mental health problems occur not because of a bad disposition, but from a chemical imbalance in the brain.

Special medicines like antidepressants and antipsychotic drugs help in restoring or at least normalizing the balance of the chemical, or as per their medical name, the neurotransmitters.

One such chemical whose imbalance results in depression is serotonin. Cipralex is an SSRI, a type of drug that is specially targets serotonin imbalance, restoring which helps in improving the symptoms of depression.

However, antidepressants need to be handled with care. They need to be taken only at the discretion of a certified doctor. The dosage prescribed is to be followed to the dot, as otherwise, it can upset the precarious neurotransmitter balance.

You can expect there to be certain side effects of the drug, but that much tradeoff is to be expected of any drug. Another important thing to consider when taking Cipralex is not stopping the intake of the drug suddenly, and especially without the supervision of the doctor.

In order to consult a doctor before using Cipralex in Pakistan, make sure to use oladocx.com  and get the best expert counseling while availing up to a 50 percent discount on your appointments.