Home Health Blog Bullying and Body Shaming at Schools, Its Effects and Prevention 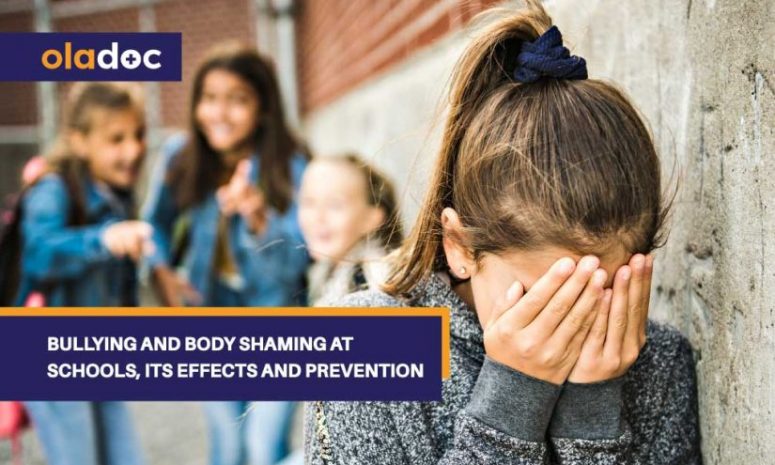 Each schoolyear is an opportunity for kids to make new friends, learn new things – grow, and enjoy along the way. For some, every passing year means adding on to the fantastic memories and experiences of the previous year but for others each day becomes a dreadful nightmare.

Why, you ask? The relentless and unremitting culture of bullying and body shaming makes it hard for them to crawl out of bed and drag themselves to school. Bullying and body shaming can adversely affect the mental health and wellbeing of children and youth. They experience bouts of depression, anxiety, and low self-esteem that eventually engulfs their life.

It is neither a unique problem nor is it uncommon. If anything, it has become an epidemic. But the imperative question that we must ask ourselves – Does it have to be that uncommon? I believe, no. Then why is it so?

Before we hop on to the preventive endeavors, let’s first explore the various forms of bullying and body shaming children are subjected to and delve into its consequences.

The most common and easily identifiable form of bullying that involves physical action like kicking, hitting, punching, slapping, shoving, etc. in a bid to gain power and claim authority over their victims.

This tactic is common among the teens and tweens, primarily among girls hence the phrase “mean girls,” to become popular and improve their own social standing by ultimately shattering the victims’ confidence.

When the bully uses some form of technology to harass or target the victim like making online threats, making hurtful images viral or sending hateful messages. The bully also hides behind the guise of anonymity, which poses lesser risk of being caught.

Done one the basis of one’s race, religion, and sexual orientation, which may encourage hate crime.

It is defined as making negative and crude comments about someone’s weight or size. Though it is something mostly overweight people are subjected to, but the skinny ones aren’t left in peace either. But nobody deserves to be fat-shamed or skinny-shamed for living the life they want to.

People will always have something to say, no matter how imperfect or perfect you are. So, it’s always better to promote body positivity. Accept yourself the way you are and stop hiding. Treat yourself with kindness and love and be grateful. Most of all, take charge of your socials and unfollow any profile that meddles with your peace and cut all toxic people.

Pro tip: Do not compare yourself with the people in the magazines and covers, that’s all camera trick and photoshop, there!

The physical impacts of bullying include mild to serious wounds, bruises, fractures and sometimes death, which can either be a homicide or suicide. Whereas some effects go beyond the physical turmoil. It subtly strips off a child of their confidence and self-respect.

Bullying does not only affect the victims’ mood or erodes their sense of self, but it makes them self-critical to the point of affecting their identity. It effects a child’s physical and mental health in a such a way that they might end up contemplating ending their life to put a stop to the constant shaming.

The perpetual consequence of it all leads to the feeling of isolation, humiliation and powerlessness coupled with anger that can have adverse effects on your physical and mental health. The worst part of emotional bullying is that the most likely solution people come up with is to “ignore it.”

Its impact is such that the bystanders to bullying also experience mental health issues.

What Can We Do?

As UNICEF terms it as a global challenge that requires global measures. We need to pitch in all, big and small measures at individual and mass level.

Bullying must not be written off as something that every child goes through as a phase. Be involved in your child’s life and stay updated. Build friendship so they feel comfortable communicating. It is imperative to take something as impactful as bullying seriously and building focus strategies to help prevent the nuisance can serve as one of the many steps that can ensure a better, safer environment of our kids.