Home Health Blog A World of Fears: A List of Rare and Bizarre Phobias (Part 1) 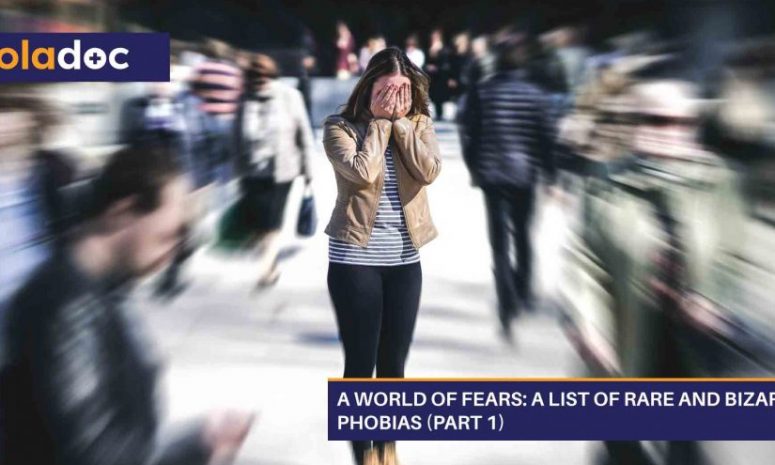 Fear is a survival mechanism that our bodies induce as protection from potential threats according to top psychiatrists in Pakistan. In high doses, however, it turns in a phobia; an irrational, life-disrupting fear of specific objects, people, or situations. While some phobias are common and well-known, there are other, rarer phobias that make you wonder about the boundlessness of human imagination when it comes to fear:

1- Agyrophobia-Fear of Crossing the Street:

Originating from the Greek word ‘gyrus’ (turning or whirling), sufferers undergo extreme anxiety and hesitation when having to cross roads. While some fear wide or two-way roads in general, others may fear a particular street or intersection, possibly due to past trauma.

Like most zoophobias (animal phobias) fearing chickens is more often the result of general feelings of revulsion at the bird’s appearance, like their talons, beaks and feathers, a bad chicken-related dream, or a fear of having their eyes ripped from their sockets, instead of any actual trauma.

Belonging to the social phobia family, affectees display a fear of confrontation and refuse to partake in group discussions. People who are unable to properly express their opinions or have experienced continued rejection or ridicule on presenting their ideas often develop this phobia.

People with dementia and their close relations fear forgetting their own identity or being eventually forgotten by their loved ones, respectively. Conversely, athazagoraphobia may also be a manifestation of being constantly ignored or left alone for long periods of time during childhood. However, despite its seriousness, the phobia is rarely discussed.

Sufferers often experience anxiety, breathlessness, hyperventilation, or sweating when asked to sit down. Several factors govern this fear, such as ingrained memories of school punishments and physical abuse involving sitting or kneeling on sharp objects, or a previously severe case of hemorrhoids around the anus or back pain that make sitting painful.

These seemingly harmless pieces of paper are a source of terror for some individuals. Chloephobics are often revolted or irritated by the texture or smell of newspapers. Some may even find it unbearable to even see or be near one.

Going beyond general awkwardness, in certain, rare cases, social phobia may manifest itself as a paralyzing fear of initiating or continuing conversations at a dinner party or lunch engagement. Another strange version of social phobia is ‘Chorophobia’, or the fear of dancing and dance-related paraphernalia.

Laughter may be the best medicine, but not for geliophobics. Rooted in constant concern over accidentally laughing in inappropriate situations or being ridiculed by others, affectees often exhibit symptoms of terror and anxiety when someone cracks a joke or when they themselves accidentally laugh.

A body complex, issues with sexuality, and/or the feelings of vulnerability and helplessness associated with nudity frighten certain individuals to the extent that they constantly fear being accidentally seen naked by others or vice versa; no matter how unlikely the situation.

Being mocked or laughed at by their peers during childhood while reading longer words, either due to a stammer or generally stumbling while reading, may carry on into adulthood as a full-blown fear of long words. In hippopotomonstrosesquippedaliophobics, even the sight of long words can induce heavy sweating and anxiety.

No phobia is ridiculous. If your fear makes daily operation difficult or takes a toll on your emotional well-being, do not hesitate to contact a specialist. You can also book an appointment with top Psychiatrists in Rawalpindi, Karachi and Islamabad through oladocx.com