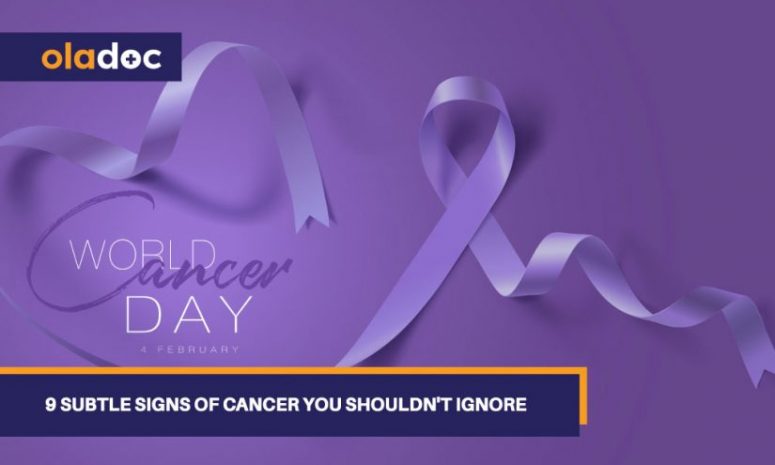 Cancer is a disease that starts slowly and causes subtle signs and symptoms in the patient. If the patient picks on these signs early, then they must consult a general physician or an oncologist. However, certain cancers manifest very late because they present overtly.

World Cancer Day is observed on the 4th of February every year to raise awareness about cancer, and encourage its treatment, detection, and prevention. It is meant to unite people from all over the world to take action against the global cancer epidemic and remember and support those affected by it.

Oncologists say that certain warning signs are specific to cancer and should never be ignored; read on to find what these signs are.

1- Changes in the breast tissue:

Breast cancer does not always begin with a breast lump. Sometimes there are other signs such as puckering of the nipple, discharge or blood from the nipple, redness of skin or nipple. If you observe any of these signs, get checked by a professional.

Bleeding between periods and spotting can be an overt sign of endometrial cancer, and should never be ignored. In post-menopausal women, bleeding of any kind is suspicious.

Melanoma or skin cancer is one of the most malignant cancers. Its spreads rapidly, and can remain undetected for long. A change in the size, color or shape of mole, as well appearance of new moles can be a sign of skin cancer.

Massive weight loss without trying is often hiding a disease underneath. Unintended or unexplained weight loss could also be caused by stress or hormonal changes, but a loss of ten pounds or more is often due to a cancerous lesion. Cancer cells eat up the nutrition of other cells and multiply without control. This is the reason behind rapid weight loss.

It is better to get checked out by a professional in this case. Your doctor may prescribe you blood tests, and imaging to diagnose what is wrong.

Having temporary bowel changes like diarrhoea is often due to microbial infection. However, long term changes in bladder or bowel functions could be an alarming sign. Colon cancer can present with changes in bowel habits, narrowing of the stool, blood in the stool, and weight loss.

Unusual and unexpected bleeding from anywhere, for instance, the nipples, or through cough, urine or stool all indicate a serious illness. If you experience such symptoms, then you should seek professional help at once to rule out the threat of cancer or detect it in the early stages.

A persistent fever, that doesn’t go away despite medication could be indicative of leukaemia or lymphoma. Persistent fever warrants a thorough examination even if it is not cancer.

9- Suspicious lumps in the neck:

Lumps in neck could also be enlarged lymph nodes, but if these lumps persist and enlarge over time, then they could also indicate carcinoma of thyroid, breast and even lung. Sometimes, lymphomas can also present as neck masses. A neck lump that lingers should always be checked for cancer.

If you need to know more about your symptoms and risks of cancer then book an appointment with a an oncologist in Karachi, Lahore and Rawalpindi through oladocx.com  for assistance to find the RIGHT professional for your concerns.

9 cancer symptoms you are likely to ignore