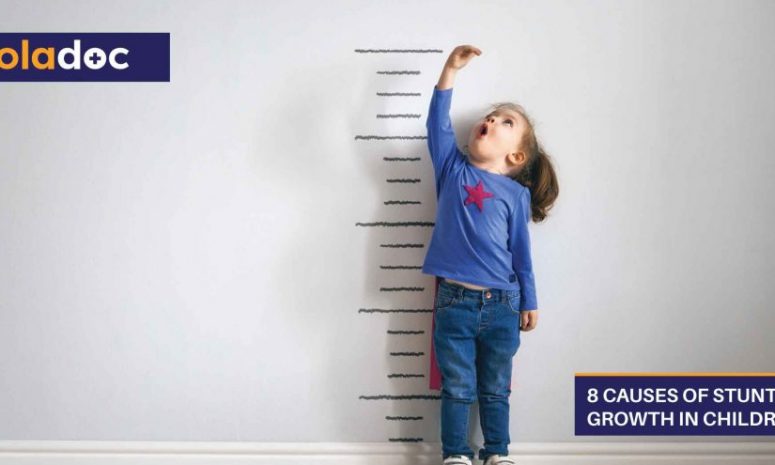 According to a 2015 survey by The World Bank, 23 percent of children under 5 worldwide are shorter than the average height for that age. So, while it is normal for children, especially toddlers to lose weight as they become more active. But consistently low weight and a height growth of less than 2 inches, or none at all, in a year, may serve as a harbinger for stunted growth and numerous possible mental and physical health issues.

Some of the most common causes of stunted growth observed in children worldwide include that require the diagnosis of a pediatrician are below.

Poor nutrition during pregnancy and insufficient breast milk consumption by the newborn baby can negatively impact overall growth and development in children. Similarly, women suffering from anemia (constant lethargy due to red blood cell deficiency), or those who are underweight during pregnancy often give birth to children with growth issues.

Some younger mothers may also avoid proper nutrition for fear of running their body figures, resulting in malnutritional and underdeveloped babies. Moreover, women who smoke during pregnancy or purposefully neglect childcare due to emotional issues also expose their children to growth and developmental issues.

This is considered the most popular cause of stunted growth in children worldwide. A diet deficient in growth-positive nutrients, namely iron, zinc, vitamin D, carbohydrates, fats, proteins, and calories can lead to a major growth deficit.

Inadequate breast milk supply or improper milk formula mixing in babies, and a child’s personal disinterest in eating are major contributive factors for malnutrition-induced stunting. However, a proper diet can help normalize the growth process in most children.

Acid reflux induces excess vomiting on eating or drinking anything, resulting in a deficiency of required nutrients despite being given a balanced diet. While the acid reflux improves with time in most infants, the stomach opening may narrow due to excess vomiting (pyloric stenosis) in some children, which impacts overall growth and development.

Some children remain underweight and short-statured as a result of their pancreas being unable to digest food. Pancreatic dysfunction can also be identified by foul smelling, bulky, frothy, loose, and/or greasy stools. Other gastric conditions that can affect growth include Crohn’s Disease (intestinal inflammation) and Celiac Disease (gluten intolerance). However, both conditions can be easily treated digestive enzyme supplements and a gluten-free diet, respectively.

Cardiac disorders and kidney problems in some children may also manifest as stunted growth and lower-than-normal weight.

Babies are highly prone to infections due to their still-developing immune systems. This is why poor sanitation facilities and bad hygiene practices in the household can affect growth and development through periodic infections and diarrhea. Some children may also lose their appetite from disgust at the unhygienic home environment.

In addition to the endocrine gland, malfunctions in the other hormone producing and regulating glands like the pituitary and thyroid gland can negatively affect height and weight in children. Such children usually have normal body proportions but appear younger than their actual age.

While stunted growth and a short stature is an inherited family trait, some children may also inherit chromosomal abnormalities (defects in the structures responsible for defining physical characteristics) from their parents. These include Turner, Down, and Russell-Silver Syndrome, all of which are accompanied by physical abnormalities and delayed puberty.

Moreover, children who grow up in households where their parents constantly argue grow much more slowly than their peers, albeit without any permanent damages, However, continuous exposure such a stressful environment can eventually lead to permanent stunting.

Stunted growth need not be permanent. If your child’s growth and development concerns you, consult with your doctor to get to the root of the problem, if there is any, and get proper treatment.

You can also book an appointment with a top Pediatrician in Lahore, Karachi and Islamabad through oladocx.com,  for assistance to find the RIGHT Doctor for your child’s developmental concerns.